You just spent north of 100K on a new car that you absolutely love and you want to protect it, keep it like new.  Believe me, I get it.  You’ve heard about protective films. You remember something called the “Clear Bra Paint Protection Film”, but you’re not sure what it is, you don’t know how to find a good installer and you’re afraid it might somehow damage the exterior.  Well, Sticker CIty can help you with all that.  Today, we’ll introduce you to the premiere product and technique used for exterior car protection.  It’s called the Clear Bra Paint Protection Film.

Choose the right protection package for your car

For those who are looking for an inexpensive solution the Little Bear paint protection film package will provide great protection on a modest budget.

Our most popular option is the Papa Bear paint protection film package. True to its name, the full front provides protection at a moderate cost to the full front end. We do our best to make it look as seamless as possible by carefully wrapping each edge using our detailed proprietary process.

Coverage includes all the painted portions of the vehicle.

For those who are looking for the best protection that money can buy we offer the full vehicle Big Mama Bear paint protection film package. This package is the ultimate option when it comes to perfectly preserving that high-end paint job. You can be assured that after installation your entire vehicle will be protected.

Now that you know which Package to select, we use the best the industry offers for paint protection film — XPEL.

What is XPEL paint protection film? Otherwise known as the “Clear Bra,” XPEL (PPF) is a clear polyurethane film that is applied to automobiles to shield them from scratches, dents, or scrapes. Too often, road debris, rocks, bird droppings and many other environmental elements assault your car. Why not protect that expensive paint job? XPEL ULTIMATE PLUS is a virtually invisible urethane film that protects your vehicle’s paint from damage and maximizes resale value. XPEL paint protection film is beloved by car enthusiasts everywhere. The best part is that it comes in three simple options so you can protect your paint job based on your desired budget.

What is XPEL STEALTH? Perhaps you’re looking for the same elite self-healing and protective features as our XPEL ULTIMATE film, but your automobile has a matte finish. Well, XPEL STEALTH comes in a satin finish that preserves matte paint in its showroom condition. Matte finishes need a different type of protection. They are notoriously difficult to maintain and even harder to repair compared to a standard finish. Even something as simple as touching up a rock chip can be a challenge when you’re car is painted with a matte finish.

XPEL STEALTH protects against road debris and bug acids while it enables you to easily wash and dry your car with no change to the luster of the finish. Your car will stand out for the right reasons with paint protection designed specifically for a matte finish — XPEL STEALTH.

Once matched and applied to factory matte paint, XPEL STEALTH disappears. This makes XPEL STEALTH a phenomenal choice for transitioning between unprotected top surfaces and vulnerable areas on the front of the car. Marks and light scratches disappear in a matter of minutes in the sun or the warmth of your garage, just like they do with XPEL ULTIMATE PLUS.

What if you’re looking for a way to protect your car and change it’s appearance at the same time? XPEL STEALTH can transform glossy paint into a sleek satin finish. For literally thousands less than a custom paint shop would charge, your vehicle can have the look and feel of a high-end matte finish. Even better, it only takes a fraction of the time. Drop your car off with one of our authorized installers and drive away with what looks like a completely different magnificent car! Make your family proud and your friends jealous. You won’t believe the change.

Can The Clear Bra Cause Potential Problems?
You’ve probably seen or heard about problems with the Clear Bra happening over time. Let’s look at some of the realities and see if we can shed some light on why these issues come up.

Where Did the Clear Bra Come From?

Automotive paint protection film or the “clear bra” is made from a transparent urethane material.  Like a lot of technological innovations, Urethane was developed during wartime, in this case the Vietnam War.  U.S. helicopters were crashing when the leading edge of the rotor blades sustained damage and needed to be protected.  Enter 3M, a company that worked with the military to develop tech that would be lightweight, but resilient.  It also needed to be easily replaced at the fraction of the cost of the entire rotor blade.  Eventually, the urethane technology was expanded to include the nose of a fighter plane.  A version of the urethane film is still being used by the military today.

In the 80’s NASCAR began using the film to protect the front end of these incredibly expensive racing cars.  It also provided an inexpensive way for advertisers to plaster their mark all over the cars creating a massive of opportunity for new revenue.  Eventually, urethane films became available to everyday consumers and became known as a “paint protection film” or “clear bra”.

What’s The Technology Behind The Clear Bra?

Now, because the Clear Bra is about to be installed on you’re new, beautiful, expensive car, you probably want to know what the heck it is.  First thing to know is that the Clear Bra comes in sheets of material.  Ok, so what’s in a sheet?  The main ingredient is urethane, a powerful and versatile polymer made from links of carbamate.  It’s amazing!  Urethane is lightweight and transparent like plastic, but is not brittle or susceptible to tears or cracks.  That’s not all.  It has a high resistance to impact, abrasion, and corrosion.  Also, because of its flexible nature, urethane can return to its natural shape after being stretched.

Given all that urethane can do, it’s reasonable to ask, “Why isn’t it used for other things?”  The answer is that urethane is used in many other ways that are very commonplace to us today.  For example, urethane can be found in household caulk because it seals spaces from moisture and prevents the growth of mildew and fungus.  Urethane is also used to coat boats and cables to protect from water damage.  It’s used in everything from mining equipment to sporting equipment like football pads and surfboards.

The Clear Bra is not just a layer urethane it has two other layers.  The top layer is a clear coat made of elastomeric polymers. This layer enables the film to heal itself from small scratches.  It also has a low surface energy, which prevents organic compounds like bird droppings from bonding with the film.  The bottom layer is lined with an acrylic adhesive allowing for flexibility so that it can be stretched and wrapped around every curve of your car.  It’s durable to prevent detachment and invisible so that the paint job can still shine through.

Rock Chips: How To Protect Your Car’s Paint

Imagine driving down the street on a beautiful summer day in one of your most prized possessions. As you cruise down the street, with the A/C blasting and music blaring through the speakers, a car in front of you passes over a patch of loose gravel, making the individual pebbles and road debris torpedo towards your car. You immediately snap out of your delighted mood when you hear the sound of rocks hitting your vehicle. You slow down and exit the car, examining the extent of the damage. There are scratches everywhere. Your pristine windshield is cracked, and your fresh

Paint Protection Film – What You Should Know

In the auto world, you may have heard about automotive protective films, as they go by different names including clear mask, car scratch protective film, clear wrap, invisible shield, rock chip protection, etc. or it could just be referred to as paint protection film or the common name "clear bra". What and Why? One of the major reasons why people use paint protection films is based on the fact that a lot of people want their cars to still maintain their looks after a long time, perhaps the reason why a lot of cars still look new even after years [...] 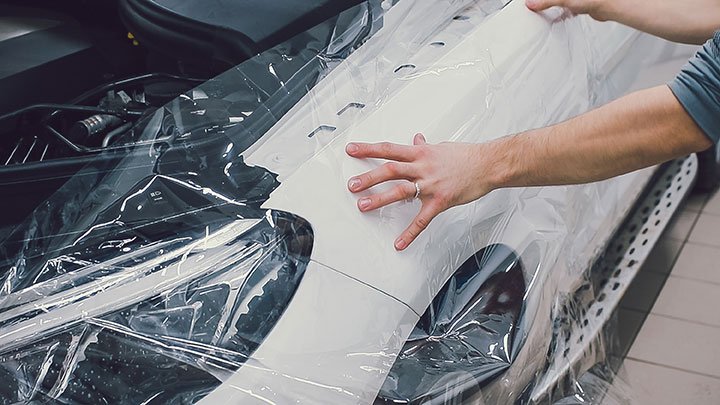 So, let's say you've got a brand-new vehicle or have been a car owner for a while. You love your ride so much, and you want it to always stay the way it is with its sparkling beautiful look. Your vehicle is important to you, and you are looking for a way to ensure that its appearance remains perfect just like the day you bought it. The best solution would be to give your vehicle some protection. Your ride needs to be protected from natural forces and elements which can decimate its Look. Today will be revealing to you top [...]

I’ve been protecting paint jobs on high-end cars for over 20 years at my shop in Van Nuys called Sticker City.  What’s happening is a problem and I feel that I must speak out.  Don’t get me wrong, there are very good installers out there, but more and more I see prices rising due to an arrogance within the industry.  You see, if people don’t know how a process works, an installer can create added value where there really is none.  This ensures that the customer will pay top dollar for “expert” treatment. Sounds deceitful, doesn’t it?  I think you’re [...]